John R. “Rick” Phillips began his career as a Law Enforcement Specialist upon graduation from the United States Army Military Police Basic Course in 1972. During Rick’s career as a Military Policeman, he served as a Nuclear Security Specialist participating in, planning and executing security operations both overseas and in the United States at normal military installations as well as special facilities that stored and transported nuclear weapons. Rick was later promoted to Law Enforcement Command where he supervised patrol operations and a Tactical Response Unit. After completing his military service, he pursued a career in law enforcement that included training and application in both Patrol and Investigative roles before moving to the private sector.   After serving in a Senior Management position with a national corporate  security  firm for 8 years, Rick founded The Phillips Group, Inc. in 1990. Operating on an International level, this firm provided a full range of Corporate Security Services to numerous Fortune 500 companies. Since 1994, Rick has been associated with several venture capitalist groups regarding the due diligence and acquisition processes of various international concerns. Upon acquisition, Rick reviews and establishes the security protocols and serves as the external CSO until divestiture.

Rick also assisted in the initial planning and implementation of security at the Georgia International Horse Park, site of the 1996 Olympic Equestrian Venue. Rick has provided personal security and risk management services to retired high-ranking military personnel, a former Speaker of the U.S. House of Representatives and a former U.S. Ambassador to the United Nations.

Rick now consults with a select clientele in the Public Utility, Chemical and Steel Industries on matters of internal security and employee misconduct investigations. Rick also leads one of the Nation’s Premiere Special Operations Units, working with companies on various Special Security needs.

Cody Cobb is a graduate of the Physical Security Training Program taught by the Department of Homeland Security and the Executive Protection Course taught by the internationally known Executive Protection Institute (EPI). Cody obtained his Georgia Police Certification in 2006 and has a total of 13 years of law enforcement and private security experience. Cody is currently completing his Bachelor’s Degree in Business Administration which he has remained committed to while maintaining full-time employment.

Bruce Grant completed his Bachelor’s Degree in Business Administration at the University of North Georgia (formerly North Georgia College) in 1977 and his Associate’s Degree of Applied Sciences-Paralegal Studies from Athens Technical College in 2014. After obtaining his degree from The University of North Georgia, Bruce began his military career by entering Active Duty in the United States Army. After leaving Active Duty, he continued his career in the Georgia Army National Guard, retiring in 2001. Upon retirement from military service, Bruce worked in county government.

With 25 years’ experience in county government and 20 years experience in the military, Bruce has a working knowledge of legal and regulatory compliance resolution, licensing, security clearance guidelines, policy implementation and logistical planning.

Lloyd Gibson has 27 years experience in Labor Strike Security. Lloyd has served as Project Manager on over 80 labor projects ranging in size from 6 to 311 security personnel and has performed more then 250 site security surveys.

Lloyd was employed for 22 years with Vance International, Asset Protection Team, Inc. While at APT, he served as a Senior Project Manager, Senior Evidence Coordinator and served 5 years as the company lead instructor at their strike security school.

Phillips Group, Inc. Is Licensed And Authorized To Provide Services In 39 States, Shaded in Burgundy Below.

In addition, Phillips Group has applied for licenses, and approval is pending, in the states indicated with burgundy stripes below. The states denoted in gray are locations with a business relationship to provide services. 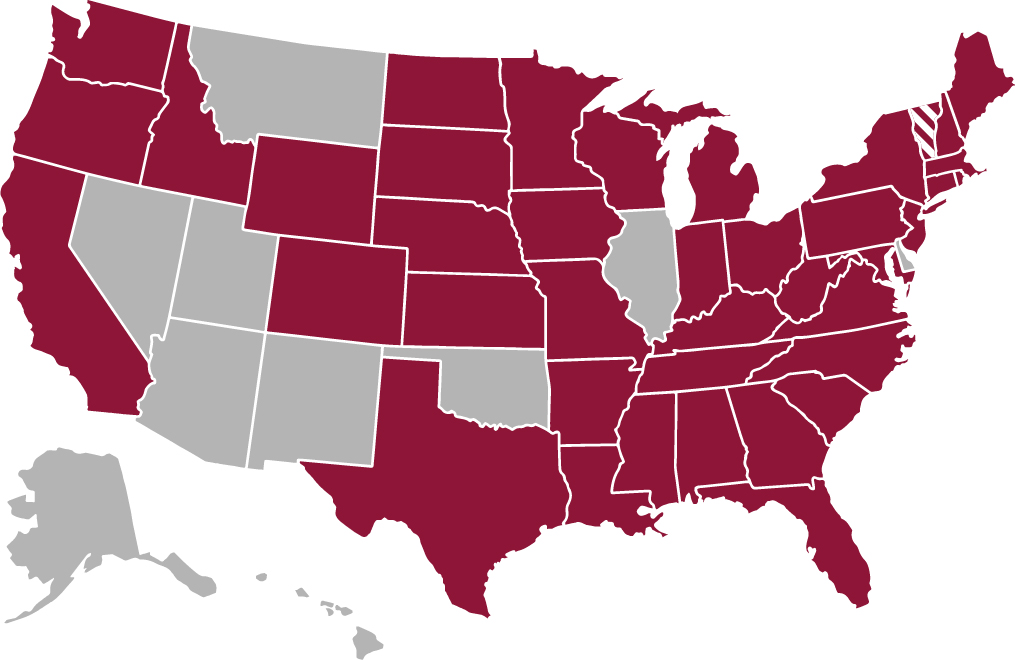